Last year we moved from Tennessee to Texas. We sold our paid-for house, and purchased a new house that was about 20% more expensive than the one we sold. Due to the timing and not having a credit score, we had to take out a mortgage for the full amount of the new house before the sale completed on our old house. We had been reassured by our lender multiple times that once we got the check from the sale of the old house, we could roll it into the new mortgage and then perform a “recast”.

Late last year, after three months of living in our new house, we finally received a bill for our mortgage payment that reflects the recast that we performed. Last year I had not even heard of a “recast”, but now we have done one. And since I had worked for a company that tried to educate people about finances and never heard this term (no relevant matches as of this writing), there are likely others out there who have not heard of it as well.

What is a Recast?

A recast allows you to re-compute your mortgage atomization based on your current balance. This requires you to have made some extra payments, likely to the tune of thousands or tens of thousands of dollars. It does not change your interest rate, and it does not change the number of months you have left. If you have a 3.5% mortgage and you are 1 year into a 30 year loan, you will still have 3.5% and 29 years left at the end. But, you will have a lower monthly payment.

Chase has a very good writeup of recasts, weighing some of the pros and cons. Other sources: Bankrate, Investopedia.

Why Recast instead of Refinance?

Now, you likely would want to do a refinance if you can get a lower interest rate, and plan on being in the house long enough that the savings in the lower rate offset the up-front cost. But if you aren’t sure if you will recover the cost of the refinance, the recast can be a cheaper option to save on monthly payments.

The Process For Us

Before starting, you must have some extra money lying around. In our case, we had the proceeds of a fully paid for house sitting in the bank. Maybe you got an end-of-year bonus, or an inheritance, or sold something really big.

Here are the steps that we followed.

I’m not afraid to show real numbers for our house transactions, since most of them are part of public records.

( * ) We actually had more money than this in the bank, but this money, from the sale of our TN house, was specifically earmarked for the recast. Also, the above math reflects about $1,000 in principle reduction through normal payments between the loan origination and the completion of the recast.

You cannot recast a FHA, VA or USDA loans. Because we went through manual underwriting, we ended up with a “conventional” loan. But, if you have a FHA loan, and have made some big payments, you may be able to go through a “streamline refinance“.

What We Could Have Done Differently

We could have avoided this process by doing a contingent offer, where the purchase of the new house would not be completed until the sale of our old house went through. Real estate agents on both sides, in TX and TN, said that due to the market, they were seeing that most offers being made with contingencies were rejected. The timing would have worked out for us in the end, but that was not a guarantee.

Years ago my wife and I had a goal to pay the house off early. Working for a place that preaches that concept further reinforced that goal. And we did. We did not have a mortgage from 2016-2020. That freed up about $1,000 per month for us to do other things. But to get there, I worked like crazy, 20 hours a week contracting for two years on top of my day job. I wonder how much more time I could have spent with our little kids, being less stressed out all the time.

I also wish we had done something to maintain a credit score, even just a credit card to run monthly subscriptions on. As nice as having the option of a recast was, we could have a lot more options when moving if we did not have to go through manual underwriting. It was not the super easy, barley an inconvenience thing that the “Christian finance personality” claimed it would be. With a decent score, we could have gotten a much better interest rate, could have qualified for a 15 year mortgage, likely could have afforded a house that was slightly more expensive than the one we purchased (there were a few we liked that were just out of our reach due to the manual underwriting), or could have explored building a house. 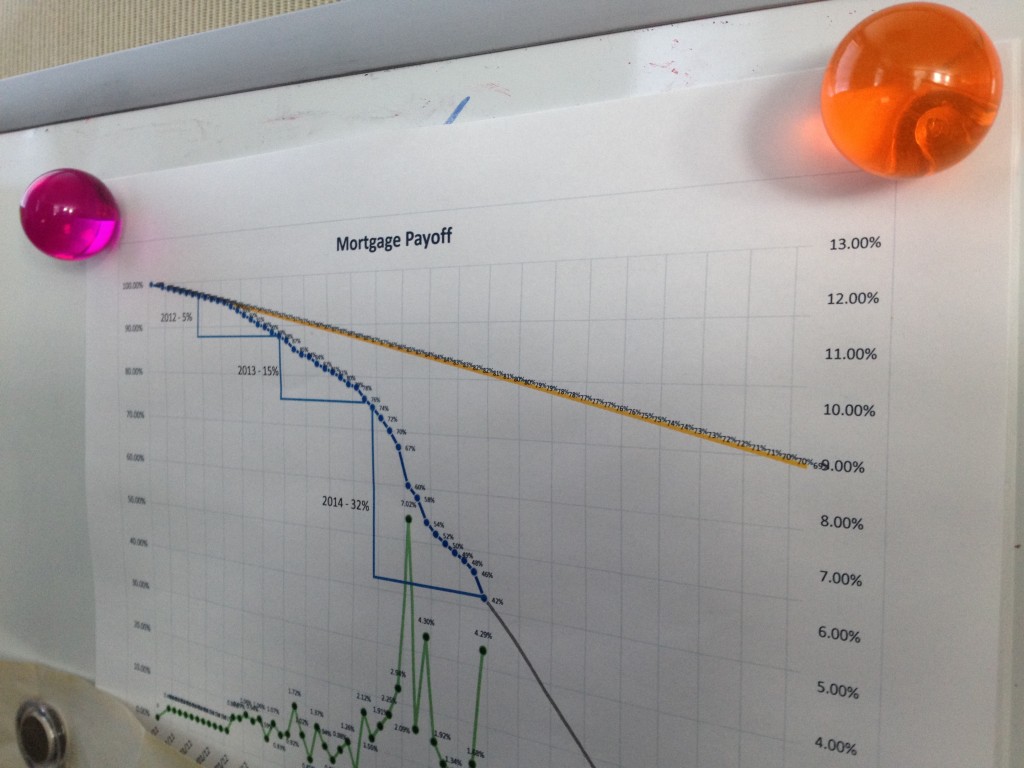