My wife and I have an unwritten rule about how we raise our kids:

Make decisions about how to raise our kids using the best information we can find, without being paranoid, second guessing, or spending every waking hour reading every opinion about how to parent.

Ok, maybe that’s not really as concise as the rule really is, but you get the general idea. When it comes to making a decision that affects the safety of our kids, we research our options, ask some friends who are slightly ahead of us, see what the experts say, and then go with that decision.

What has surprised me, or at least did when we had just one child, is how polarizing some simple decisions seem to be. One of those is how long a child should remain rear-facing in their car seat. People have truly thought we were complete weirdos for choosing to rear-face our kids past one year.

For the longest time, I trusted my wife’s research on this matter. She did her senior project in college around car safety for kids, and has done a lot of other research since then to be an informed mom. But, after my wife shared this article on Facebook, the nerd in me decided it was time to finally look at some data myself.

The author of the above article summarized this matter thusly:

As of 2011, the American Academy of Pediatrics recommends that kids remain rear-facing to a minimum of two years old, regardless of height or weight, and should continue to rear-face until they outgrow the seat in that mode.  Children’s vertebrae are not fused until well into early childhood, and this makes them prone to serious injury or even death if involved in an accident.  Basically, if the crash could result in whiplash in an adult, it could kill a small child.

The current recommendation by the AAP is that kids remain rear-facing for 2 years. The AAP is usually a good place to start when looking for quick recommendations and best practices when it comes to children’s health and safety.

Per Wikipedia‘s sources, the statistics for accidents are:

Rear impact crashes are the most common crashes in the US, but are also the least likely to result in a fatality. So, when evaluating safety, we want to make a choice that sets us up to best handle the types of accidents that are likely to produce a fatality – head-ons, rollovers, and side impacts.

There have been numerous studies about car seat safety, but many of them are published in journals that do not share their content freely online. These can sometimes be accessed from a library.

One publication that is available is a study performed by Volvo: Safety for the Growing Child: Experiences from Swedish Accident Data. 3,670 children of the ages 0-15, from a time period covering 1987-2004, were a part  of this study that was conducted on a database that Volvo maintains of accidents.

The study mentions two measures for injury severity, AIS and MAIS. Per Wikipedia: AIS – Abbreviated Injury Score – a scale of one to six, one being a minor injury and six being maximal (currently untreatable). For a given accident, there could be multiple AIS numbers, one for each of several regions of the body. MAIS is the maximum AIS sustained for an occupant – if the head had an AIS of 3 and the abdomen 2, then the MAIS would be 3.

The study starts on page one with a brief summary:

Simply put, a child is much safer rear-facing up to 4 years old compared to being unrestrained. Well, that is a no-brainer. 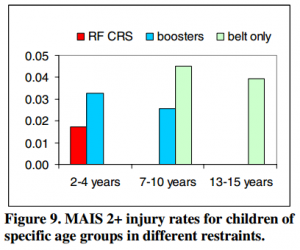 In the accidents studied by Volvo, children aged 2-4 who were rear facing (RF CRS) had a MAIS of 2 or more with a propability of about 1-2%. If they were in a forward facing booster seat, that rose to over 3%.

On the next to last page, a specific accident is referenced:

The performance of rearward-facing seats is shown by the low injury rate. Only three children sustained MAIS 2+ injuries in frontal impacts and they were all exposed to relatively high severity impacts. In contrast to this, the two-year old forward-facing child (in a lap/shoulder belt and booster) sustaining the combination of fatal head injury and cervical spine fracture typically illustrates the vulnerability of the neck and head for small children in forward-facing boosters. This child’s five-year old sister, sitting next to him in the rear seat (using the same type of restraints), sustained no injuries. This two-year old would have been better protected in a rearward-facing CRS.

Also, regarding the different types of collisions:

The rearwardfacing child seats are designed primarily for frontal impacts, however the outcome for side and rear-end impacts indicates a good performance also in these situations. In this data, no rearward-facing child sustained MAIS 2+ injuries in side or rear-end impacts.

Finally, “what is the minimum required by law”? It turns out that child safety restrain laws vary from state to state. When we were in Missouri with our first two, the law was:

Now that we are in Tennessee with three children, the law is even stricter:

No matter what data you choose to base your decisions on, you should still follow the law of your state.

“We Were Fine Growing Up”

We occasionally get criticism on our choice to have our kids rear-facing, and it almost always comes from people 2-3 generations older than us. The response is usually “We didnt have car seats growing up, and we turned out just fine. We even sat in the car without seat belts.” Our response to this is – “Thats great! You were probably never in an accident.”

Speed limits on highways today are higher than they were 20-50 years ago. Cars have more safety features than they did then.

I also hear this regarding me or my generation – “You were fine with your (not rear-facing seat) growing up”, which would have been the late 80’s and early 90’s.

Wikipedia’s summary of collisions also has a similar chart, going back as far as the 30’s, on this page. The number of miles we drive continues to go up, but the number of deaths per miles continues to drop. Safety features and required restraints likely key contributors to this.

There is plenty of data out there to research, many of which are in publications that require a trip to the library or a purchase to read. A lot of those publications are linked to from Wikipedia’s page on Child safety seats (look at the bottom).

Go out there, do your research, and make a choice that is best for your family.

For us, the data is convincing enough that we are going to leave our kids rear facing as long as possible.